Little Stars builds ovens with a small chimney for less than EUR 10 per oven. Before that, meals were prepared over an open fire producing a lot of smoke and soot.

Just picture this – an open fire  producing dense smoke in a house with a low ceiling. Children sitting in front of the fire coughing and eyes watering. Anybody who has been to Nepal knows this situation. A few years ago we came across simple smokeless ovens.  We successfully trained two masons and they were given two wooden moulds to produce the required bricks. Costs for material and wages are low. House owners are charged half of  these costs to make sure that the ovens are serviced and maintained  properly.

Building an oven is easy but the villagers had to be convinced of the  advantages of the new technology. Apart from preventing burns and  permanent damage to the eyes or ear, nose and throat area, the heat output of the new ovens is much higher.

Most ovens built have two fireholes: one for cooking and the other one for keeping prepared food hot. This is a very useful feature but totally unusual for the local housewives. Building is quick and is  only interrupted by the drying process. The smoke disappears through the chimney and is directed into the open via a  T-fitting.

Due to the different construction of the new earthquake-proof houses  built after the 2015 earthquake, demand for these simple smokeless ovens has gradually come to a standstill. Cooking is done mainly in an outside shelter next to the house or gas cookers are used.

Over the past years we have been able to build more than 500 ovens. This gave the villagers a better quality of life. Especially the children  benefitted from the project and the oven builders enjoyed the work a  lot. 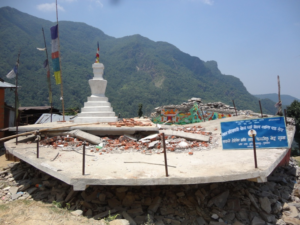 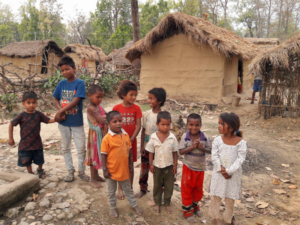 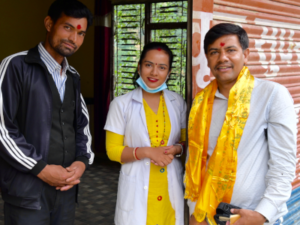